I realize it has been a while since the last update. Now that the cold weather is here I find myself ready to put the car on the lift for storage the rest of the year.

Some miles were added this year. Mostly short trips in known areas due to the excessively low oil sump height. This is on the list to get fixed in the off season.

Ultimately the car has a good summer season. It makes a fortune of power and was enjoyable to drive. One major issue has been the throttle hanging at mid throttle. Thankfully the brakes are up to the task. I did take the throttle body apart and polished it with 3000 grit sandpaper. It feels significantly smoother but we will find out next year. 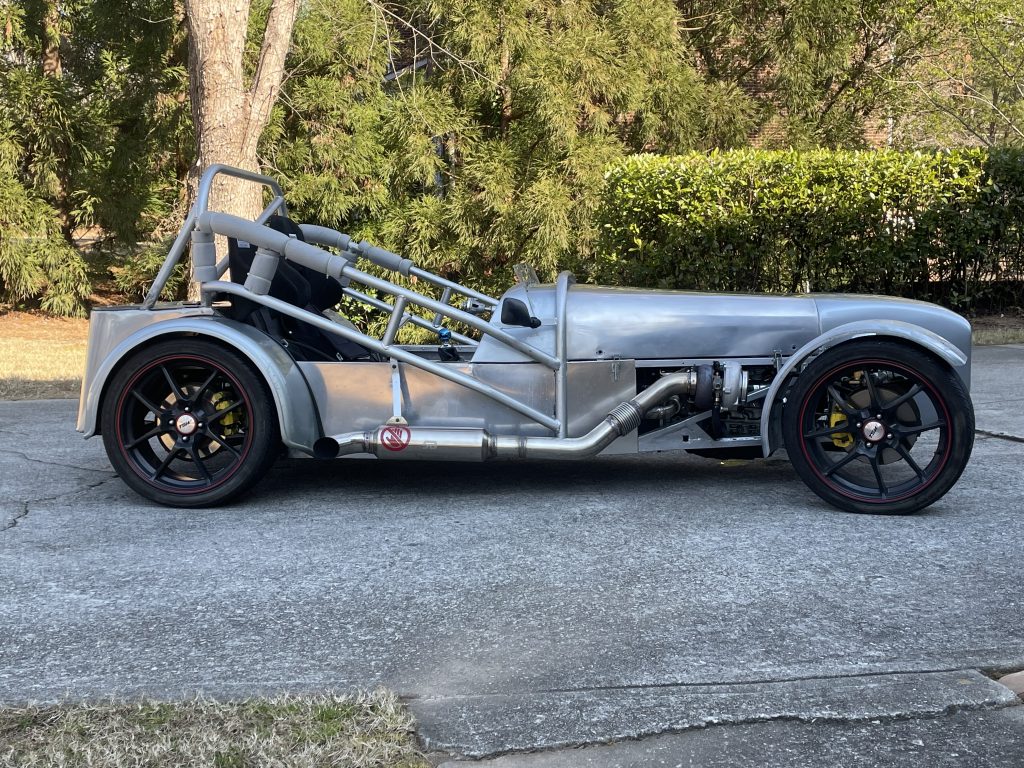 The perfect cold morning was the opportunity needed to put some road miles on the vehicle. With the sun shining I left the driveway and the vehicle was perfect! Engine hummed nicely. The turbocharger sung happily and the blow off valve worked for the first time since finding the vacuum leak.

Power delivery was smooth and driving around at low speed felt very comfortable. Upon hitting the gas the vehicle would unleash an army of houses and instantly cause the tire to summit and smoke to peel off their edges.

The only downside was a leaking 3 cent o-ring. Easy enough to fix and a fantastic day -even if only covering 49 miles!

The day finally came that I could get the car on the rollers. I’m very thankful to have some fantastic friends that helped me get to this point as well as beyond. My buddy Neil let me borrow his trailer (perfect 7 size!) and Dave that owns Complete Performance has been a friend for years.

Car fits perfectly on the trailer Neil uses for his radical.

Admittedly the car wasn’t behaving when it went on the trailer. My attempt to change base fuel pressure was not perfect and resulted in a very soaked set of plugs.

Thankfully Dave has been around these issues and quickly helped diagnose the problem and a new set of plugs got us going again at 43.5psi of fuel pressure. Up next was to do some basic pulls to 4000rpm. Our goal was to check that everything worked together and we didn’t have surprises.

Like with any car that has not been tested we found a few bugs. The first was an issue in which we made 12psi of boost-twice what the watergate spring was supposed to make. Dave quickly found the push lock line I used was too close to the turbo and has melted into the heat sleeve. Effectively we had no watergate connection and the tune would have gone to the moon.

The next problem was a water leak. The one thermostat housing has a connector that was an ORB connection. Unfortunately it’s poorly machined and it spits the o ring out. As a result we had a leak. The AN wrench helped us get it tight enough and not leaking. I will be replacing this soon (and probably adding Hondabond).

The next issue is one we haven’t fully understood but after a pull when the clutch is pushed in a spark would appear. I suspect the throw out bearing is not enjoying its kissing the pressure plate at 8500rpm

Ultimately we struggled to get the Hondata ecu to add and remove fuel as expected. Additionally learning in this area will be needed. A vtec code also emerged and you could heard a noise at the vtec cut over.

All in all a good day and I’m appreciative of the help and where it got me.

The initial fuel injector purchase seems to have been a bad decision. The first set of injectors were 2000cc and turned out to be just a bit too big for pump gas.

The pulse width for idle on 93 octane was .02% and there was a heightened smell of informed fuel coming from the exhaust.

Why did I ever buy such large injectors? My goal is/was 650hp and e85 was the logical means to that goal. Unfortunately the availability isn’t great locally and from what I’ve seen it isn’t a great choice for cars not driven frequently. As a result I’ve lowered power expectations and only plan to use pump gas.

Replacement injectors were ordered. 1000cc injectors which I believe will provide enough power. The ability to turn up fuel pressure and potentially fuel pump voltage might be the answer.

The car starts SMS revs perfectly but a nagging problem is I would not see any indications on the software of a TPS signal below WOT. The problem produced odd behavior but I believed it was just how the Hondata ecu worked.

After driving and not seeing the tuning results in the data log I decided to pull the tps and flip it 180 degrees. I’m doing so I noticed the connection point was incorrect and the sensor was not making contact with the throttle shaft until 25% of the sweep happened. A small correction and things were showing TPS motion the entire way through the range. Timing is more responsive and drivability is better.

One problem remains. Under WOT I am not seeing boost over 1 psi. The watergate has a 7 psi spring in it and so something isn’t kosher. The hunt continues…

It took a while to resolve but finally everything is 99% done. The coolant problem was most likely caused by a bad (and brand new) thermostat. After adding aircraft piping with stainless heat jacket (see picture) we had some success but a small leak caused by npt and straight thread being incomparable. Eventually I changed to -16an and things are working fine.

The radiator was replaced and -16 fittings welded on. There was a need for a shaped flexible coupler and so the piece below solved the problem.

At this point things are lined up and ready to head to the tuner. Hopefully we get there one day soon. The car has 25 “neighborhood” miles on it and feels good. Still only 4 forward gears but fine for now.

With all pieces on and ready to go we just need to drive this thing. Our pre work test with the professional driver appeared to pass although he made some strange faces.

His reaction is understandable given he is sitting in a car built by the guy that cant get his diaper installation correct quite frequently.

Mixed.. The transmission appears to only have 4 working forward gears. 5th must have left the party at some point. Guess I should have understood why it was being sold at a discount.

Otherwise it was good. Car runs stupidly rich. 2000cc injectors running 93 Octane appears to have burned 8 gallons of fuel in under 1.5 miles. So hopefully next we will be going to the tuners!

Finally got to one of the finish lines… After many pieces coming together we made some big progress.

First was the valve cover. I did not need to replace the black unit I had before but I did need to weld to -10AN bungs on the cover for routing to the catch can. I went with white because it is the easiest to see dirt/oil etc. The 2 ports route forward and empty into a tank at the front.

Body work was rather simple. I was able to get keep the sides open to vent out a lot of heat.

Long term I would probably place several pieces here to allow air to exit better. It is nice to be able to get to the jacking port so easily.

Everything under hood looks good and tucks nicely. The turbo guard is hopefully up to the job. If not we will have to get creative.

With the hood on- You can see the turbo but generally it looks fairly clean and sleek.

After much work we have a dashboard in place! By changing the engine I needed to change the gauge cluster. Unfortunately there were some large holes from the Mazda unit and so I opted to replace it with a sheet of aluminum.

New cluster uses the same Trailtech Speedo and Rev Counter. We have 2 new lights for a Check Engine light and one for low oil pressure. 2 Gauges are for boost pressure and the wideband O2 sensor.

I am pretty happy with the results. If I find it to be too bright I will just wrap it with vinyl. I will say that after using the K Pro mobile app I would be happier with a tablet in the middle… That day may be coming sooner than I thought.. Their performance is good and pricing is low!

Stefanie was nice enough to buy me the tig welder I had been drooling over. I had a Lincoln Precision Tig 180 amp transformer machine before and I knew there were a few things I wanted to do differently. I was looking for an AC/DC machine but one that was inverter based and had a smaller footprint. The answer- The Primeweld 225. The support you read about online is second to none and under $900 was not bad either. The unit is always backordered but they seem to get units shipped fairly quickly,

It sat on an inverted bucket until my wife fixed my next problem. I had been searching for a cart and never found any I liked. I wanted it to sit on the side of the garage and not take up a big amount of space. So what happened? While moving a piece of furniture inside a marble shelf broke and the wine rack became less useful. I offered to take it and added wheels to it.

It allowed me to have my plasma cutter on it as well and space to store things. Ultimately it was a great move. I am a big fan of both the cart and the welder. The next project was storing the 5 or 6 different tig rods I had collected. I had some fancy commercial tubes but needed more and was not willing to spend $30 a piece. Following an online video I found the PVC Idea.

Essentially it is a PVC tube cut into a 2 ft and a 1 ft piece. Caps on both end and a coupler in the middle- but only glued on one side. To get maximum style points I used my plotter and cut names for each tube. So far this has been fantastic! I am a fan!